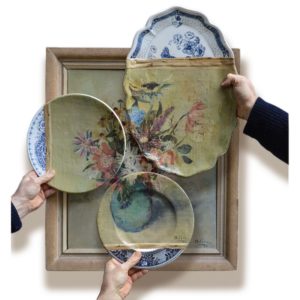 Ceramic plates as decoration have been made and cherished for centuries.
Our attraction to plates – and by extension to ceramics in general – came by way of their surface decoration as well as their shapes.
The idea to use the subject matter of the plates and combine it with another image came about in 2010 with our ‘Altered Perspectives’ series.
As the name implies the ‘perspective’ of the painting is ‘altered’ by combining it with the subject of the decoration of the plates, the sum of the whole being more interesting than the individual parts.
As we explored these compositions, the shapes of the various plates also became an important element. Ovals mixed with circles, and with scalloped shell shapes or 18th C. inspired Delfts Blue plaques.

FROM ALTERED PERSPECTIVES TO ALTERED HISTORIES
In 2014 we created a new series where we designed every aspect of the ceramics:
both the plates and our own digital transfers. In effect we were setting out to create the idea of the ‘Altered Perspectives’ entirely in ceramics.
In the process of creating our own plaster moulds we discovered the beauty of the textiles combined with the ceramics.

FROM A DIFFERENT CLOTH
It was this ‘surprise’ discovery that lead us to push the whole idea of what we were making in an entirely new direction. We wanted to create ceramics with texture, but leaving them unglazed, and yet have colour. To achieve this we added pigments to the stoneware or porcelain, thus leaving the surface texture untouched. We created our own custom colour combinations, so that the end result is just as much about the colour as it is the texture and form. The entire process from surface decoration to shape to texture and colour has been a very organic one, and like anything in a natural process our story within ceramics continues to evolve. 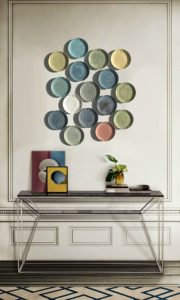 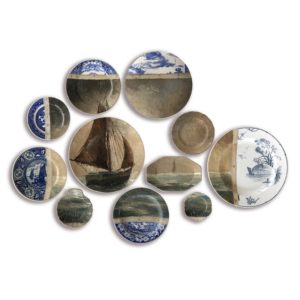